My name is Jamellia McFarlane but friends call me Millie. I was born in Queens New York but raise in Florida. I’m 27 and a social worker. I have been natural since Nov 2011- so 6yrs.

I returned natural because I had shaved the side of my hair and wanted to start over. I was doing weaves, but my hair was so uneven and had damaged ends, I needed a fresh start.

If someone is thinking about returning natural I would say to them that we should have never left but everybody has their own journey. When I was growing up, I was a box braids baby because I had thick hair, was tender headed, and my mom didn’t know what to do with my hair because I would always cry when it was time for it to be done. Side note, my mom has dreads currently. But anyways, eventually I begged her to perm it. Yea perms made my hair kind of manageable but also lifeless because it damages the curl pattern. Plus, if I knew how to take care of my natural hair, stopped looking at other cultures hair, and wishing/trying to reach their hair goals, my hair would be so different. Shoot I should have just locked up anyways because I was wearing braids all the time but that wasn’t my mindset, so then I became dependent on weaves until my big chop in 2011.

I feel as black women we are creative, and weaves are as a craft to us, but we shouldn’t be so wrapped up or dependent on it that if we don’t have it, we don’t feel beautiful. Our hair DOES GROW, it just needs some patience, less expectations, as well as sun, water, and oil. We have the definition of beautiful hair.

P.s if I would have locked my hair when I was younger, it would have been down my back by now. Probably would had higher self-esteem because my hair was a low point of me. But I’m happy where I am now, and this hair journey I’ve been on. I wouldn’t change it for anything. In 2 yrs., my hair has grown tremendously with locks. I’ve found a way to finally care it by patience, self-acceptance, and love.

My favorite hairstyle is half up and half down.

Connect with me on: 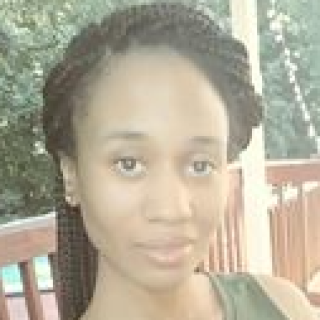